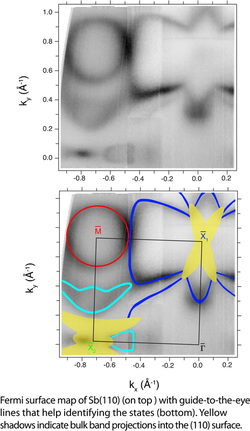 Here you can find a low resolution version of my thesis.
A higher resolution  version will be available soon on our group website.

Abstract
The combination of strong spin-orbit interaction and loss of symmetry at surfaces and interfaces often leads to an electronic band structure in which the degeneracy with respect to spin is completely lifted. This is frequently called the Rashba effect and it has emerging applications for spin-filtering and spintronics, the intrinsic spin Hall effect and the spin quantum Hall effect.
An important and largely unexplored aspect of these effects is how the spin splitting affects the lifetime of the electrons in the different states. It might, for example, be possible to construct a spin-filtering device which is based on lifetime effects, i.e. on the preferential decay of excitations with a certain spin direction. Recently, accurate theoretical calculations of the band structure, spin-polarization and lifetimes for simple model systems have become possible and the lifetimes are also accessible experimentally via the linewidth of states in angle-resolved photoemission (ARPES). Furthermore the electronic structure of systems characterized by strong spin orbit splitting is not only of fundamental interest in solid-state physics and spintronics technologies by itself, but in the last ten years a new field has emerged coupling the traditional knowledge of surface states with the theory of topology. The latter predicts a plethora of novel phenomena in condensed matter physics that play host to a number of physical phenomena such as Majorana Fermions, unconventional superconductivity and magnetic monopoles, showing that spin orbit interaction (SOI) possibly leads to a new state of matter called topological insulator. A topological insulator is a material with an insulating bulk, characterized by an electronic excitation gap generated by the SOI, while, due to time reversal symmetries, the presence of gap-less electronic states is detectable at the edges (i.e. the surface in tree dimensions). These metallic surface states show an unconventional spin texture, electron dynamics and stability.
My PhD project is concerned with the experimental exploration of these model and original systems with high-resolution ARPES on the synchrotron radiation facility ASTRID and ASTRID2, as well as with scanning tunneling microscopy and spin-resolved photoemission. 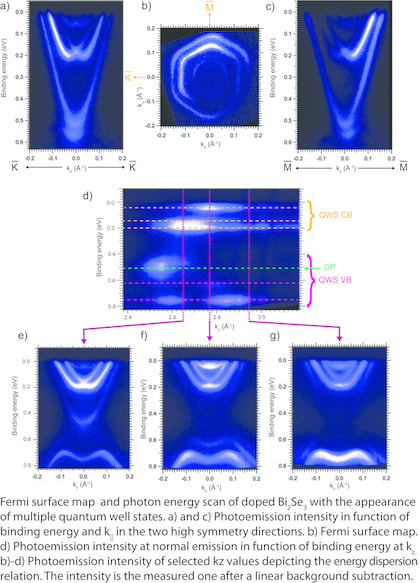 Thanks again to all the people that supported, taught and helped me throughout these productive and instructive 3 years! 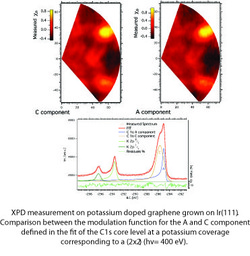 The goal of my master thesis project is to understand the morphology and the electronic structure of a clean and K-doped graphene layer on Ir(111). Angle Resolved X-ray and Ultraviolet Photoelectron Spectroscopy, Low Energy Elec- tron Diffraction and Thermal Desorption Spectroscopy are some of the techniques I have used to investigate the properties of the system. EDAC simulation are used to understand Photoelectron Diffraction pattern. I have implemented a new self-consistent method to determine the electron-phonon coupling constant λ via simulation of the spectral function. I have performed the measurements on the SuperESCA beamline @ Elettra, at the Surface Science Laboratory @ Elettra in Trieste and on the SGM III beamline @ ASTRID in Aarhus.

__Supervisor: Prof. Alessandro Baraldi
In my bachelor thesis project I describe a fast alignment procedures for a supersonic molecular beam that has to be used in studies of catalysis and kinetics. I characterize the properties of a O2 supersonic beam varying temperature, pressure and position of the source, by measuring the time of flight distribution of molecules.